Sinn ag loighe ar in lucht romhainn, lucht oile orainn san úaigh
We rest on those who came before us, and others will rest on us in the grave1

Early medieval Ireland was split into four main political divisions, with the Ulaid (Ulster) in the north, Mumu (Munster) in the south, the Laigin (Leinster) in the east, and Connacht in the west. In the centre was Mide (Meath), which encompassed the political centre of Tara and was associated with the high-kingship. Each province was known as a cóiced, or ‘fifth’, and according to some schemes Meath formed a fifth province, or else Munster was split into two – East and West Munster.2 The four main provinces remain today: 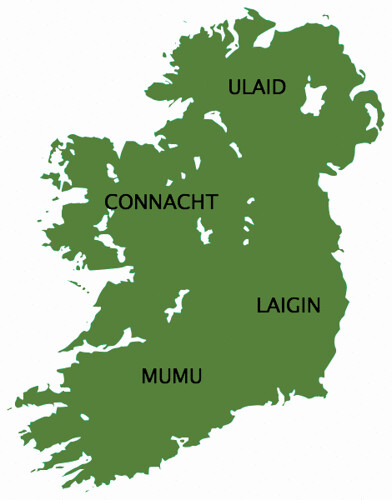 Provinces of Ireland (based on a map from Wikimedia)3

As we will see, the evidence suggests that each province had an overarching goddess of sovereignty, from which many claimed descent from: In Ulster, the main goddess we find is Macha; in Leinster, there is Brigit; in Munster there is Anu; while in Connacht (and Meath) there is Medb. Within these areas, distinct dynasties rose and fell over the centuries, and we can often see from the genealogies and toponymics that these families had their own ancestral deities and sovereignty goddesses.

It is often said that ancestor worship was (and still is) prevalent in Celtic cultures, as it has been throughout the Indo-European cultures. We can see from the archaeological evidence that generations and generations of people were often buried in the same burial mounds, Iron Age remains being interred in the same area as their prehistoric ancestors. The inference is that it was believed that ancestors remained important long after their death, perhaps being seen as welcoming the more recently deceased into the afterlife. Certainly it was important to know where you came from – the pedigree of your ancestors, the names of the people who came before you – affected the status and political standing of you and your offspring in the present.

It is natural, then, in this respect, to see that one’s own ancestors are worthy of veneration; after all, we wouldn’t be here today without them. Looking at the evidence, however, we see another reason being suggested; often, families traced their genealogical pedigrees back to the gods themselves.

In the rise and fall of dynastic fortunes, various families endeavoured to keep detailed family genealogies. A large part of the reason for this was political – a good pedigree helped support political claims to power and territories, because they helped to show that the family making the claims had the right sort of connections to the area. Over time, a lot of these families weren’t averse to basically re-writing their ancestry (to a greater or lesser extent) in order to fit their purpose of the time, although there was a limit to what they could get away with – it was far easier to change their earlier ancestry, rather than their more recent histories, which other people would be more likely to know.4

Most of the surviving genealogies date to the twelfth century, but some of the earliest (of the Laigin) date as far back as the seventh century.5 Many of these genealogies bear the marks of careful editing, with many families tracing their ancestry back to Éremón, one of the sons of Míl, and through him, back to Noah – all firmly and neatly in line with the Bible and the Lebor Gabála Érenn.

Not everything fits so tidily within this Christian framework, however. Some genealogies clung to a descent from other waves of invaders who took, or claimed influence, over Ireland, such as the Fir Bolg or the Fomorians.6 The Tuatha Dé Danann get several mentions as well, with the Lebor Gabála Érenn going so far as to say:

“…for what learned men say is, that every princely family that is in Ireland, save the Eoganacht, is of the seed of Nuadu Airgetlám.”7

Otherwise, members of the Tuatha Dé Danann pop up here and there, giving their name to certain dynastic septs – such as the Uí Méith Macha, who are connected with the ecclesiastical establishment of Armagh (Ard Macha) from as early as the sixth century.8 Given Macha’s close ties with the area, it’s tempting to see their name as linking themselves directly with a divine ancestry.

Similarly, the Delbnae Nuadat, situated just east of Lough Corrib in around the early sixth century9 (so conceivably still bearing genuine pre-Christian origins), appear to have traced their descent from Nuadu based on their name for themselves.10 Unsurprisingly, given the lough’s associations with Manannán mac Lir (as Oirbsen), at least one sept of the Connmaicne, who were based beside the lough (the Conmaicne Meic Oirbsen Máir), traced their descent back to Oirbsen and therefore Manannán mac Lir. On the whole, however, the Conmaicne took their name from Cormac, who descended from Medb and Fergus mac Roic.11

In Munster, the Eoganacht traced their descent back to Míl’s son Eber, through Áine, her father Fer Í (‘man of yew’ – hinting at a reference to a bile, sacred tree), his father Eógabal, and so on back to Eber. Sometimes Áine is listed as the daughter of Manannán mac Lir, however.12 Yews figure elsewhere in the origin legends of the Eoganacht, with Conall Corc’s founding of Cashel – the royal seat of Munster – being prompted by a vision of seeing it built on a rock where a yew grows out of it.13 The main religious foundation of the Eoganacht, at Emly (Imleach Ibar) in County Limerick, also gets its name from a word for yew (ibar).14 All of this suggests a long established pedigree going back to a sovereignty goddess that has been tweaked into a more acceptably Christian, although still thoroughly Irish, framework.

Contrary to the claim of the Lebor Gabála Érenn, however, Nuadu does get a mention in the Eoganacht genealogies, albeit indirectly. Those who traced their descent through the founder of Cashel, Conall Corc (c400C.E.) have Mug Nuadat as a distant ancestor; the name means ‘servant of Nuadu’,15 suggesting that Mug Nuadat – also known as Éogan Taídlech, or Éogan Fitheccach – was a devotee of Nuadu.16 In the myths, Nuadu is often shown as a good king – so beloved, in fact, that the leeches of the Tuatha Dé Danann fashioned him a new hand, first of silver, and then of flesh and blood, so that he could reclaim his seat.17 It makes sense, in this respect, for kings to associate (and perhaps even devote) themselves with such a paragon of kingly virtue.

It is said that Mug Nuadat negotiated the splitting of Ireland into two parts, with Conn Cétchathach, ‘Conn of a Hundred Battles.’ Mug’s half was called Leth Moga (literally – ‘Mug’s Half’), while Conn was given Leth Cuinn (‘Conn’s Half), and it is all very reminiscent of the splitting of Ireland by the sons of Míl – Éber and Éremon. Éber got the Munster half.18

Áine is said to have been raped by the Munster king Ailill Olum, but later tradition has her popping up again in the fourteenth century, giving a good Irish pedigree to the Anglo-Norman Fitzgerald family after having a passionate affair with the third Earl of Desmond.19 Again, genealogy is seen to be used for political gain.

The tract on ‘The History of the Descendants of Ir’ (Ulaid) traces their origins to Munster as well, but also we see at least one mention of a member of the Tuatha Dé Danann in an offshoot of the sept:

“The seventh was Domongort of whom the hero Ronan was the son from the middle. But the other part was like Manannán son of Lir. For Ronan was sprung from both viz; a half from head to heel from each respectively, the right side from Domangort, the left from Manannán.”20

Ronan, it seems, had two fathers, perhaps in attempt at boosting his pedigree, like the legendary Cruithin king Mongán (whose father was also Manannán, according to Immram Brain, for one). Or else perhaps we might see it in a comparable way to that of Cú Chulainn, who is said to have had both a mortal father – Sualtaim – and a divine father, Lug.

Otherwise certain septs of the Ulaid (the Dál Fiatach and Dál Riata, of the east and north-east of Ulster in particular) were known as the Dáirine, descendants of Dáire (who seems to have been an ancestral deity).21 They had their origins in the Corcu Loígde of Munster, who along with the Uí Liathain traced themselves back to Dáire and were associated with the Fir Bolg.22 The Corcu Loígde, along with the Corcu Duibne, also held Buí (later known as Cailleach Bhéarra) as one of their mutual ancestors.23

In what is now County Wexford, there were the Benntraige, who traced their descent from Benta, son of Mál, all the way back to Lug son of Ethnenn (Ethne).24 James MacKillop makes Lug the god of the Laigin, being of the opinion that Lug is who they derived their name from; this is linguistically unlikely,25 however, and looking at the names of septs in the area – the Uí Brigte, for example, and possibly the Bairrche (though less likely to derive their name from Brigit),26 along with the foundation of Brigid’s monastery in Kildare – all suggests that Brigit was very much the goddess associated with the area.27

Overall then, the gods are as much a part of the people as they are the lore and landscape. The following map details the areas referred to in the article above, and also incorporates some of the genealogical information detailed in the previous article The Gods of Landscape and Lore, which didn’t need repeating here; the names listed span many centuries, and is not meant to suggest a snapshot of Ireland from a specific period. The accompanying table summarises all of the above, for ease of reference, listed by province: 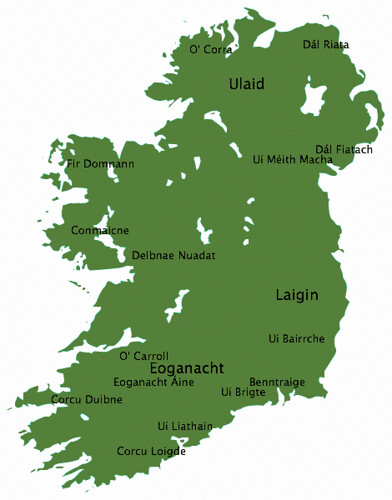 Túatha with divine ancestry (based on a map from Wikimedia)28