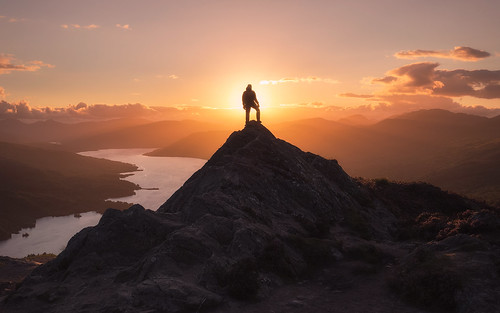 Sunset over Binnien, by John McSporran.

This prayer, from Volume III of the Carmina Gadelica, is a lovely affirmation of belief. It may be especially useful to help calm and centre yourself during times of stress, or to prepare yourself for a long day ahead, perhaps, or to ensure a peaceful night’s sleep.

The prayer given here is mostly as the original, though the penultimate line has been changed from sna flathas (“the heavens”) to san speur (“the skies”), which I feel is a little more neutral in its connotations.

Carmichael translates An Teòr here as “The Three.” On its own teòr can mean “the limit, mark, sign,” (perhaps a warding gesture?) according to Dwelly. Teòra, however, can mean “three” (again according to Dwelly), and it is found in phrases such as An Teòra Bheannaichte, “the Blessed Trinity,” teòra pòg, “three kisses,” or teòra là agus oidhche, “three days and nights”; in modern Gaelic, teòra is given as “triad,” according to Am Faclair Beag, so clearly teòra is what is meant here. I can only guess that the final a has been missed off because “teòra tha” would be a bit clunky otherwise.

I’ve chosen to stick with “An Teòr” here because while it clearly refers to the Holy Trinity, it’s ambiguous enough that it can easily apply to the gods, spirits and ancestors as well, just like An Trì Naomh. Intent is key here. If you’re uncomfortable with it, you can always adapt the prayer to address a specific deity of your choice.