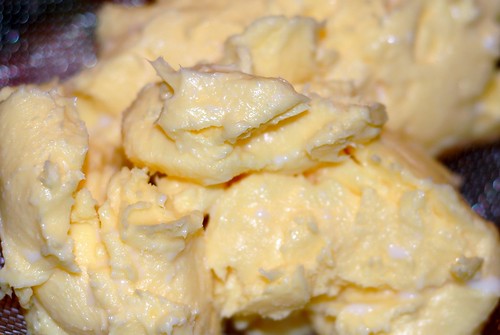 Churning butter was an important part of the summer’s activities in the Gaelic economy, since dairy produce was a large part of the daily diet.

Milk production relied on cows being allowed to calve, and they typically did this every year. In order to do this, however, the calves would have to be weaned and the cows’ milk allowed to dry up so that they would be fertile again. Over the winter, while most cows were pregnant, there wouldn’t be a lot of fresh milk available to most people – or any, for some – though those with larger herds might allow one or two cows to retain their milk; as a general rule, however, their supply would often naturally dwindle, so there were usually diminishing returns; it was better to keep breeding and capitalise on the abundance of milk in the summer.1

During the summer months the milk needed to be stored effectively so that it would last throughout the winter. Hard cheeses are one way of doing this, but as a rule the Gaelic economy focused on butter. Sometimes caches of butter were placed in bogs, which allowed the butter to be stored longer, and the butter would also take on a distinctive flavour from the

bog water, which was considered to be a delicacy. Bog butters could last for years if they were kept immersed in the bog properly, which may well be where the practice came from. Sometimes, due to the shifting nature of the bogs, the butter might end up getting lost, and some bog butters have been discovered during peat cutting that have proven to be thousands of years old.2

Butter-making was hard work and if the cows weren’t getting enough to eat, they wouldn’t be able to produce milk that was fatty enough to make butter properly. The process could therefore be a little uncertain at times, and so – just as with any other aspect of the work day – both milking and butter churning were tasks that were heavily laden with traditions and charms that helped things along.

It’s said that the cows of the Gaels were the best milkers, but they would only produce milk if they were sung to by the maids. There are many of these songs, called an Oran Buaile or a Shieling Song recorded, one of which can be found here. If a cow’s milk failed without explanation then inevitably the suspicion of witchcraft would be mooted. A witch could turn herself into a hare and suck the cow’s milk right from the teat, or – at Bealltainn, especially, since it was the traditional start of the milking season and the move to the summer pastures 3 – they could use a rope or spancel drawn through their neighbours’ field to “steal” the milk that way, as they said a special charm: 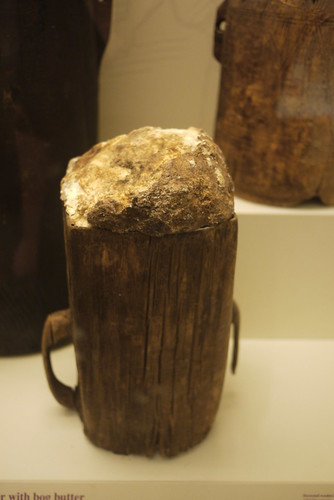 Not appetising: Bog butter from Ireland

This sort of practice could also pre-emptively be done in your own field to make sure no-one else could do it, either. A Scottish version of the charm goes:

When it came to churning, the churn dollies would often be made of special woods like rowan, or else hoops of rowan were wrapped around them, to help protect against witchcraft.6 Salt or silver was typically thrown into the milk before churning began,7 and if anyone came to visit whenever butter was being made at Bealltainn, it was traditional to take a turn. Besides helping spread the load, it showed that the visitor bore no ill-will to the household on such a potent day, and so if the butter failed no suspicion of the evil eye or witchcraft would fall on them.8 Should witchcraft be suspected at any point, there were a variety of counter-charms that could be used, too.

As the butter itself was churned, a charm was also usually sung. There are all kinds of charms that are recorded from across Ireland, Scotland, and the Isle of Man, and they all tend to concentrate on encouraging the “lumps” or, in this case below, the “store” to come; in one instance the lumps are addressed as a’ chailleach bhuidhe – “the yellow cailleach” – showing her presence once again.

These days we can easily buy butter from the shops, but churning your own can be a good addition to celebratory rites, especially where butter is an important feature. All you need is double cream (‘heavy’ cream) and something to churn it in. You can buy small, simple churns from specialist stores or online, but putting some cream in a jar and then shaking it works just as well (though it does take a bit of elbow grease!). Using an electric mixer is a much quicker method, and goes a bit easier on the wrists and elbows. Once you start churning, you can say a charm like this until the lumps come:

During the churning process the butter will come very suddenly, with the lumps of butter separating out quickly. Once the butter has formed large clumps you can stop churning. You’ll need to separate the butter out from the liquid (the buttermilk) and then strain the excess liquid out; you can do this using a sieve and a spoon until the liquid stops coming out. You might also want to flavour your butter with some salt. The leftover buttermilk can be used in baking (they make excellent scones and pancakes!) or as a refreshing, creamy tasting drink in its own right.

As is traditional, after churning a little of the butter should be left as an offering:

Whatever milk falls on the ground in milking a cow is taken by the fairies, for fairies need a little milk. Also, after churning, the knife which is run through the butter in drying it must not be scraped clean, for what sticks to it belongs to the fairies. Out of three pounds of butter, for example, an ounce or two would be left for the fairies. I have seen this several times.10